Samosa is a popular snack in India, especially in Northern India. You can find it in every roadside tea stall, small and big restaurants, college canteens, movie theaters, etc. A quality Samosa costs somewhere around Rs. 10 – Rs. 25. Stuffed with spicy mashed potato and is served with some chutneys, in some places Samosa is served with Chola (curry of Chick Peas.) In states like Maharashtra, you can get Samosa Paav as well. However, in some cities, you can see some experiments being carried out with Samosa like somebody recently told me about Chicken and Paneer Samosa as well. 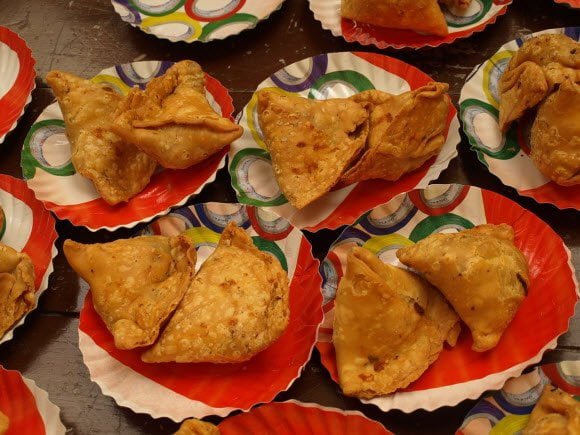 All about the great Indian Samosa

If you too are a Samosa lover, here is something for you. A website, which can be said to be ‘The Samosa Chronicle’ full history of Samosa, its origin, places where Samosa is found, etc. The best thing about this Samosa Chronicles, which I liked most, is it also tells you about the delicacies from the other parts of the world, which are not the Samosa, but the preparation is almost on the same lines of Samosas.

You can visit The Samosa Connection, and find out more; you will come across several facts which you probably never heard. Here are some examples–

“The SAMOSA probably travelled to India along ancient trade routes from Central Asia. Small, crisp mince-filled triangles that were easy to make around the campfire during night halts, then conveniently packed into saddlebags as snacks for the next day’s journey.”

“Amir Khusrao, prolific poet of Delhi royalty, observed in 1300 that the royal set seemed partial to the “samosa prepared from meat, ghee, onion and so on”.”

“In the Turkish-speaking nations where it is called samsa (& variants) it is made both in half-moon shapes and triangles. Sedentary Turkish people such as the Uzbeks and in Turkey itself, people usually bake their samsas, but nomads such as the Kazakhs fry them. Occasionally, samsas will be steamed, particularly in Turkmenistan.”

So go ahead, visit The Samosa Connection, and know more about your favorite Samosas.

Rights and Duty of Consumers In India (Consumer Court)

Bringing you Home Safe even after a Drunk Party