WANTED is history, DABANGG is here. A mindless caper, Dabangg is a treat for people who love mindless entertainment.  It is two and a half hour of Salman and his unparalleled Star Power. This movie instils our faith in Salman as the ‘last action hero ‘. It is worth every penny you pay to watch an entertainer.

It is pretty evident right from the first frame that it is going to be a Salman at his very best. The movie is like a sequel to Wanted in terms of the comedy and action sequences. A lot was riding on this film specially the pride of Salman and that he is still a crowd puller. Dabangg has opened to packed houses all across the nation which answers a lot of questions actually. 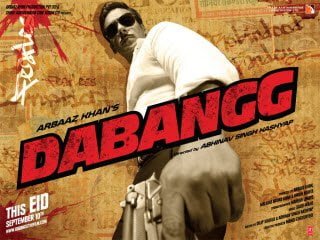 There is nothing artistic about Dabangg, there is not much of a story as well. Salman lives in Lallpur, Uttar Pradesh along with his mother Dimple Kapadia, Step-father Vinod Khanna and step-brother Arbaaz(Makkhi). His relations are strained with both his step-father and brother. He ends up being a police inspector while Arbaaz is drifter who is wasting his time. Chulbul Pandey is a kind-hearted corrupt cop who is adorable. But his brother Makkhi steals the money he swindled out of the goons so that he could marry his girlfriend Mahie Gill.

On one of his missions he ends up beating up goons who work under local youth leader Chedilal(Sonu Sood). But, Chulbul is more than willing to rub Chedilal the wrong way. While chasing the same goons he lands up meeting Rajo( Sonakshi Sinha) and falls in love with her. Rajo is a potter and craftswoman who lives with her drunkard father (Mahesh Manjarekar). Chulbul finds pretexts to meet her regularly. But the day he proposes her(in his own unique way), he discovers that she would not meet her till her father is alive as she is responsible for his well being.

On returning back home he finds out his mother is dead. He tries to improve relations with his father but all in vain. He starts living in a service quarter. Life goes on and Mahesh Manjarekar commits suicide so that his daughter could marry Chulbul. Chulbul marries Rajo in the ‘mandap’ that was supposed to be Makkhi’s ‘mandap’. Chedilal and Chulbul constantly conspire against each other………..well in the interim Vinod Khanna’s factory is burnt to ashes by Chedilal and blame is on Chubul. But eventually in the climax everything fits right in. The father accepts the Chulbul and Makkhi who is sent by Chedilal to kill Chulbul joins hands with him to kill Chedilal. That is when they discover that even their mother was murdered by Chedilal.

Well the story is something that we have been seeing like forever. But the difference is Salman Khan. He has taken his Wanted image to a next level in Dabangg. The dialogues of the movie add to the character of Chulbul Pandey and establish him as the fearless cop. The comic sequences are good as well.

Why you should watch Dabangg :

SALMAN, SALMAN AND SALMAN is the reason you need to go and watch DABANGG. He is simply outstanding. It is a role that suits only and only Salman. If any other actor would have attempted the gimmicks that he so easily pulls off, the movie would have been a disaster. It is a role written with Salman in mind and he doesn’t disappoint.

He lives the character of Chulbul Pandey. Years down the line when people will remember the great roles he played, Chulbul Pandey will most certainly be one of them. Sonakshi Sinha is good too. Given it’s her first movie; she has done a commendable job. Rest of the cast really doesn’t have much to do. Arbaaz was good in his character, so was Sonu Sood.

The music of Dabangg is good and adds to the strength of the film. The item song ‘Munni Badnam’ would compel you too shake a leg or two in the theatre. 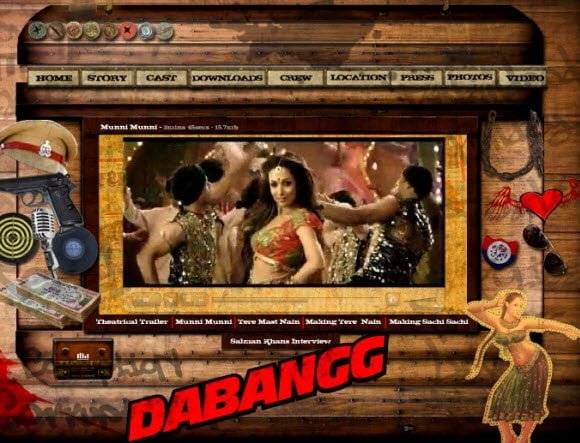 ‘Tere mast mast do nain’ is also pleasant. ‘Hud Hud Dabangg’ is a song like ‘Jalwa’ from Wanted and could very easily be played at Salman’s lifetime achievement award years later. It defines Salman.

Smart movie to choose as a debutante director. Abhinav Kashyap is the younger brother of acclaimed film-maker Anurag Kashyap. He doesn’t show a glimpse of that in Dabangg. It seems as if they are from two different planets. Dabangg is a purely commercial movie with no great emphasis on artistic aspects as in Anurag’s films.

If Peepli Live, Udaan are the films that are highly acclaimed this year, Dabangg will be the topmost grosser at the Box Office. It is a movie that appeals to front benchers and ardent Salman fans. As for the others, you’ll love it too for the great action sequences and comic sequences. And if not then you’ll love it for SALMAN ”CHULBUL PANDEY” KHAN.