When is it celebrated?

It is celebrated on the fourth day of the moons bright fortnight, or period from new moon in the lunar month of Bhadrapada. It generally falls in August or September and continues for five, seven or eleven days.

Why is it celebrated? 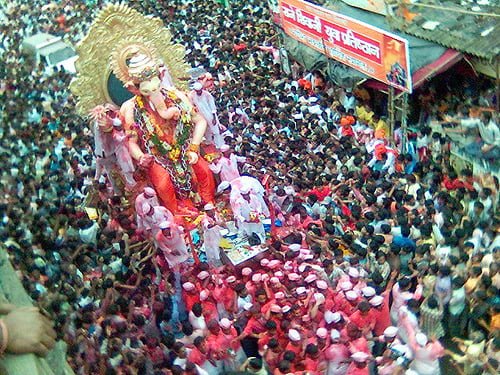 Ganesh Chaturthi is celebrated on the occasion of the birthday of Lord Ganesh (Ganesha), the god of wisdom and prosperity. According to the mythology, he is the son of Shiva and Parvati, brother of Kartikeya – the general of the gods.  There are numerous stories in Hindu mythology, associated with the birth of this elephant-headed god, whose vehicle is the Mooshak or rat and who loves Modaks (droplet shaped Indian sweet).

How it is Ganesh Chaturthi Celebration done?

Ganesh Chaturthi is the ten-day festival which is celebrated in every part of the country. The idol of Lord Ganesha is set up in the homes for worship; people have their fast, distribution of sweets is the collective aspect of the festival of Ganesh Chaturthi.

Ganesh Chaturthi is so famous that the preparation starts before a month in advance. Before the ten-day ceremony begins, people attain an excellent state of purity by cleaning the houses, especially the place where the idol is to be placed. The home of the puja is decorated with lots of lightings, flowers etc. At the time of the evening, devotees do their prayers and aarti.

On the other hand, big idols of  Lord Ganesh is set up in the pandals. The goddess is worshipped in the morning and evening with simple recitations of the devotional songs, offerings of flowers, sandalwoods and diyas. On the last day, the idol of Lord Ganesha is immersed in sea ar any other holy river. Thousands of devotees participate in the immersion process by dancing, singing the devotional songs and drum beats. Shouts of “Ganapati Bappa Mourya” meaning “Oh Lord Ganesh come again early next year” resound all around. It is the last stage and at the end of the ten-day festival.

Is it a good idea to leave problems to children for sometime ?

Do I need to submit LPG KYC form?