CWG has already started, there is much being talked about several aspects related to CWG, also a major issue which is being faced by the people commuting within Delhi is the traffic directions. Several roads and lanes have been blocked; traffic is diverted via some different route, or for that matter, some usual routes are highly crowded, in such case, wouldn’t it be better, if somehow you can get a traffic direction, or which route to follow to your destination before you start your travel? Delhi Police has come up with the solution, which seems to be helpful for the commuters and the traffic administration officials as well.

‘Traffic Directions During Commonwealth Games 2010’ is a service which helps the commuters in Delhi to decide their route based upon the specific Start and End point of travel. Have a look at the animation below.

I hope by now you would have understood what this tool is all about and how to use it, simply right click on any location on the map, and select it as your starting point, later in the same way select the destination point, as soon as you are done with this, it shows you the route, later you can also check on the walking route, and you can also see the detailed directions clicking on the link as shown below. 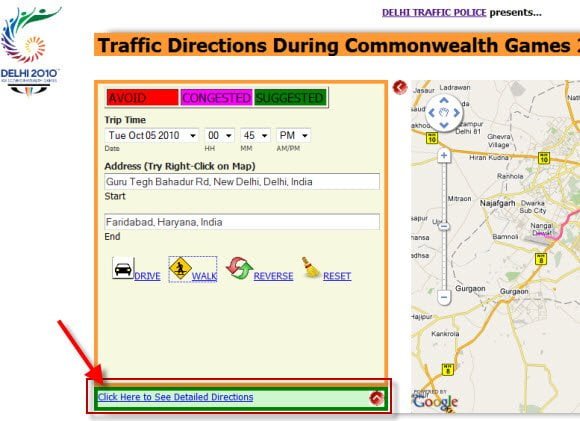 So, if you are in Delhi, this is definitely a great resource, go ahead and exploit it for a safe and hassle free commuting, also you can check out Map with Suggested route & Game Lanes to take during CWG.

Helpline against child labour in Delhi