Latest researches have proved that if the children are left alone with computers or say a difficult mathematical problem they can themselves solve it out and learn how to operate the computer. I know it’s difficult for many of us to accept the fact but that’s the truth.

Learning in today’s context has become an emergent behaviour. Children in a slum of Delhi when left with computer alone, they themselves figure out how to use the computer and started operating the same helping each other. These children hardly go to school and had no access to computers and internet before. This proves that” children will learn to do what they want to learn to do.” 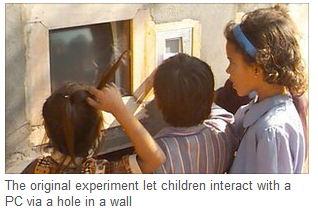 The statement becomes more authenticated when a group of children in Rajasthan learnt how to play and record music on computers within four hours. It proves that if given chance these children can learn a lot no matter whether they live in slums or belong to the higher class of society. Our mind set needs to be changed. We should not create a distinction among ourselves. The society need to broaden its thought.

Professor Sugata Mitra after examining the above mentioned cases started a school known as SOLE – Self Organised Learning Experiments. Inspired by the above experiments and seeing its success he wants to bring a makeover in the concept of learning. In his school also he has organised the spaces in such a way that each computer is shared by four children. The above experiments have proved that the children if left alone can organise their own method and make each other learn accordingly. A bit of concentration by these children has proved that they can also learn new things.

Now it’s upon us as to how do we refer these children? Are they really slum children or normal child ?  Via BBC

Rent a Party wear, save your money and donate for a cause too

What to Do if You Are a Victim of Cyber Obscenity?

Indian Union Budget 2012 : What became costly and what got cheaper