India is a known place for temples, in fact, it counts for the highest number of temples when compared to any other part of the world. However, it is very difficult to find temples when you are out to travel. The usual ways to find information on temples are from our parents, grandparents or relatives who had been there. IN this modern age we have even more resources including Google Maps. However, today we are sharing a website which lists down many Indian Temples. It focuses on core details like history, origin, and details which usually are not available everywhere.

Indian Travel Portal’s Temples Portal gives you in-depth information and list of Indian temples according to city, state, age, religion, and gods. You can find temples by region, gods or deities, religion, and pilgrim center. 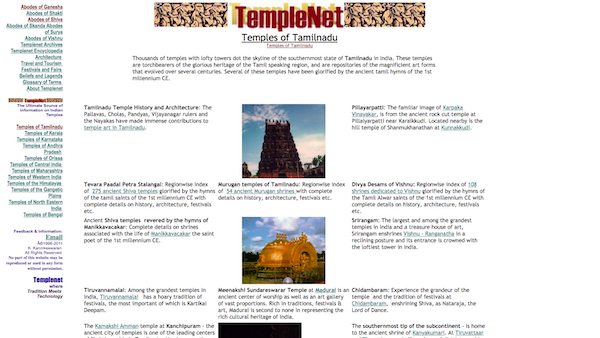 Here is the list of places of which temples that are covered :

A lot of effort has been taking by listing details of individual temples, about its history, and placing the images. Each page offers in-depth detail about the temple, its history and is perfect for those who are planning to write up on Indian Temples.

The encyclopedia offers Index by Region. You can read about the diverse architectural styles, festival traditions, and worship protocols as you journey through this vast collection of temples.

That said, I really wish the website was transferred to the modern-looking theme. Nevertheless, it is one of the best sources which has listed down temples, details and its history. More at Temple Net

A Journey through the changing Shapes of Indian Coins

How to Apply for Patents Online in India

Teaching to become more attractive [ At least in Rural India ]

By 2020, Breast cancer to overtake Cervical cancer in India

What Are the Licenses Required to Start a Food Business in India?