India is a country where different religions and cultures exist. It is the birthplace of  Hinduism, Jainism, Sikhism, and Buddhists, which are among the world’s major religions. If we talk about population then, India is the second most populated country after China having a population of 1,150,000,000 (1.15 billion) people. India is called the country where unity in diversity exists. It has  28 states and nine union territories. Here is the list of National symbols India.

National symbols of India you should know about

These symbols are intrinsic to Indian identity and heritage. Indians of all demographics backgrounds across the world are proud of these National Symbols as they infuse a sense of pride and patriotism in every Indian’s heart.

Let us know more about Indian symbols. Many of us know about the national flower, national bird, or domestic animal, but do you know about our national aquatic animal or national tree? Here are some National symbols of the country which every Indian should know:

The National Flag of India is a horizontal rectangular tricolor of Saffron, white, and green with the Ashok Chakra, a 24-spoke wheel, in blue at its center. The Saffron color represents courage and sacrifice, white color represents peace and truth, and green color at the bottom represent prosperity. The Chakra in the center is chosen as it represents as Dharma and Law. You can learn more about Indian Flag and exact color details used here

Peacock is the national bird of India. It is a symbol of grace, joy, beauty, and love. The Indian Peacock is a colorful, swan-sized bird with a fan-shaped crest of feathers on its head, a white patch under the eye and a long slender neck. We were lucky to sight a lot of Peacock in our Rajasthan Trip, especially at Do Jati Temple, near JhunJhunu, though the current scenario says that Peacock might go extinct in India soon. 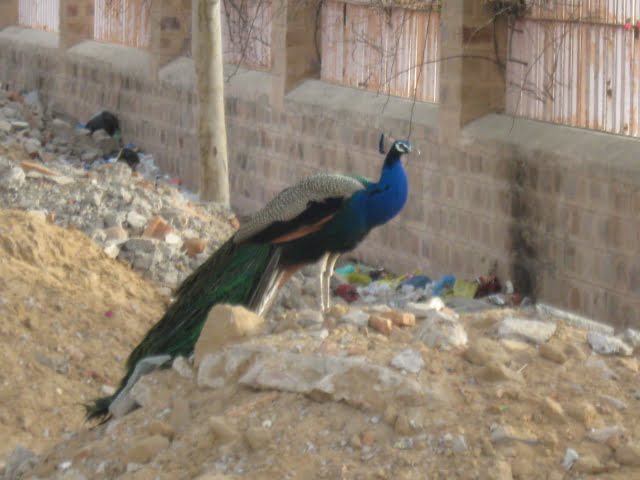 Lotus is the national flower of India. It symbolizes divinity, fertility, wealth, knowledge, and enlightenment. It is also regarded as a symbol of triumph as it can survive to regerminate for thousands of years. Lotus represents long life, honor, and good fortune

Banyan is the national tree of India. Banyan is considered one among the sacred trees.

My favorite Mango is the National fruit of the country. It is also called “king of the fruits.” There are more than 100 varieties of mangos in India, in a range of colors, sizes, and shapes.

River Ganga is the national river of India, and it is the longest river in the country. Hindus revere the Ganga as the most sacred river on earth.

Vande Matram is the national song of India. Bankim Chandra Chatterjee composes it in Sanskrit. You can download it on your computer from here ( MP3 )

Jana Gana Mana is the national anthem of  India and is composed by the late poet Rabindra Nath Tagore.

The currency symbol is an amalgam of Devanagari “Ra” and the Roman Capital “R” with two parallel horizontal stripes running at the top representing the National Flag and also the “equal to” sign. The Government of India adopted the Indian Rupee sign on 15th July 2010. It is designed by Uday Kumar from the Indian Institute of Technology, Mumbai.

Ten Handy Tips when in Kitchen

Immersion of Idols and Polluting the water – Who is responsible ?

Aid by the Guwahati Government for Kidney Transplant Patients