Navratri is the nine-day festival dedicated to Devi Durga by Hindus all over India. The nine days represent the nine form of Goddess Durga, and its a new night for Durga for the next nine days. These nine forms are worshipped throughout India. In 2019, Shardiya Navratri is in between 29th September – 8th October 2019

Navratri is celebrated twice a year. Once in March or April, called Chaitra Navratri. The second is one celebrated in September or October, called Sharadeeya Navratri.  Almost every part of the country celebrates Durga Puja or Navratri as Nine days festival. During these nine days, Goddess Durga is worshipped in nine different forms. As per the religious books, they are forms of Goddess Saraswati, Parvati and as Durga. Here is the list of nine days according to the Goddess worship. 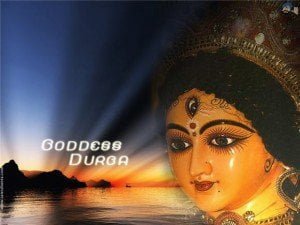 Navratri days and their meaning

What is Mabon and how to celebrate Mabon?

These are the nine forms of Goddess Durga, also known as “NAV DURGA.” On 10th day, Dusherra is celebrated, and on the same day, idols of Goddess are carried in a procession to the seashore or the river banks for immersion. A large number of devotees take part in this procession on the last day of the festival and take blessings from Goddess for their wellness and peace in the society.

How is Durga Puja celebrated?

The festival is celebrated in India with great enthusiasm and excitement.  Every day of Durga Puja festival has a different method of worshipping by offering various sweets, fruits, clothes and other material. People sing various ‘Bhajans’ (devotional songs) and offer prayers for the well being of their families and society. Many people celebrate Navrati by fasting for nine days.

On 8th or 9th day, the fast is completed by offering the prasad to the Nine Young girls(Kanya Pujan). In West Bengal, big idols of Goddess Durga are set up in various pandals, and people come to worship them. In Gujrat, People celebrate Navrati by playing Dandiya.

If you love to put Navratri Wallpapers on your computer, grab it from here. May this festival of lights brings you a lot of happiness and success! Jai Mata Di!

Repainting to Change the Car Color to be legalized in India

Indian Rupee gets a New Symbol

Frequently Asked Questions on Cricket which you may not know