Ethnic wear, an unstitched fabric of feminine elegance, a sensual attire or a six-yard wonder. Sari can be defined in a thousand other ways round, but in one word, it only represents the traditional culture of India, which has been recognized globally. In this post, we will talk about the history of Sari and also learn how to drape or wear Sari.

A brief history on Sari

The word sari evolved from the Prakrit word ‘sattika’ as mentioned in earliest Buddhist Jain literature. The word got shortened to sati and further evolved into word Sari. The history backdates us to the days when the civilization got established, yes to the Indus Valley civilization.

The sari used to be draped in a way so that it divides the two legs and forms a trouser attire better understood with the word ‘dhoti’ being worn by both male and female.

Different parts of INDIA are having different types of sarees and also follows a different pattern for draping a sari. Sari is usually worn with a blouse and petticoat. Blouse covers the upper part of the body. The underneath is the petticoat which helps in tucking the plates of the sari.

In early days sari was draped more in an appealing manner viz in fishtail manner. It was tied at the waist and covered the legs. The pall used to come in front of the legs as a decorative drape. It is still worn in the interiors of India but more often seen down south in the state of Kerala.

Blouse got its existence with the Muslims and British era. Since then, many new experiments were carried over with modern times. For a better and a more profound impact, it can be covered with a statement that “sari is the perfect garment to enhance the beautiful feminine curves and has proved since time immemorial’.

How to drape or wear a Sari? 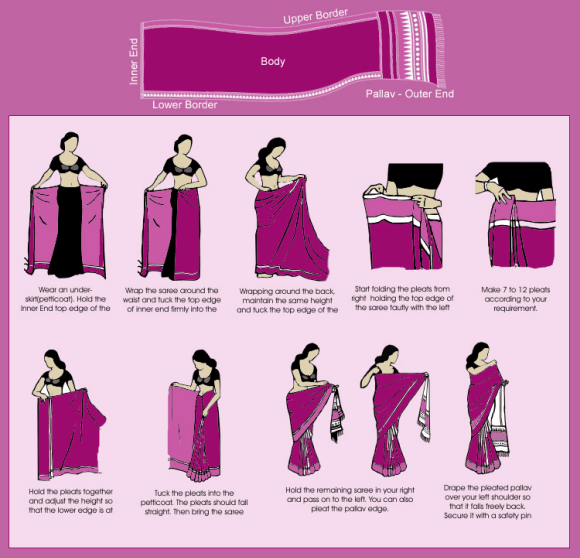 For a better understanding, let’s learn how to wear a sari. Look at the image below and follow things step by step.

Sari – Is it getting out of fashion?

No matter jeans and salwar kameez and more fashionable dresses have come in, Sari is always getting the priority and never given a second thought, even in the offices and meetings and significant dealings. Sari has changed from what it was and now what it is in terms of style and texture. With the event of new fabrics like georgette, crepe, braso, lazer, net, chiffon and innumerable materials. It has not lost its essence and value.

Sari reflects mood, occasion, feeling, love; it is always preferable on time or a wedding or a party. It was and is the symbol of Indian Culture and Ethic.

How to complain against Power Cut in India