Though this policy is not new but it seems Telecoms like Vodafone, Airtel and others might just start applying it rigorously after a recent announcement on 19th December for which couple of friends was emailed about.  The time period for inactiveness is 60 days.

Though some might just revolt saying its wrong but I think its pretty fair deal keeping two things in mind. First this will dropdown the boosted subscriber count for every carrier and secondly for security reasons it will be easy to bring down such numbers which might, just might, be used by wrong set of people. 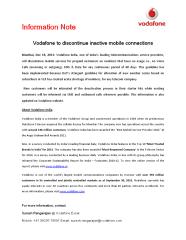 Said that it brings a burden over subscribers who leave their country for long period of time which could be ranging between 6 months to 2 years, specially people in IT. So the option for them is to either take their number along with them under international roaming or keep reminding their family members to keep using it in between for sake of keeping it alive.

So Under what circumstances the number will be discounted  : Numbers that have no usage i.e., no Voice Calls (incoming or outgoing), SMS & Data for any continuous period of 60 days.And if you are wondering why this came up all of a sudden is because Dot’s stringent guideline for allocation of new number series based on subscribers in VLR has created acute shortage of numbers, for any telecom company.

Now you dont need to panic if your family forgot to use it as the carriers will call you up or send SMS to remind you of this as even they dont want to loose customer so a fair chance is given to them also. Thanks Sandip

Free Download Pre-Partition Map of India and several other Maps

Features of LIC Endowment Plus Plan