DANCE is a lucid expression of human beings. Like INDIAN Culture dances are also diverse. It’s an art where you can express without words also. The essential feature in classical dances is the use of mudras or hand gestures. In this post, we will share the types of dance styles in India.

Theses gestures help you to narrate a story or particular objects like weather, nature, and the inner feelings of love, care, anger, etc. Dances are performed for every possible occasion, to celebrate the arrival of seasons, the birth of a child, a wedding, and festivals.

Three best-known deities, Shiva, Kali, and Krishna, are typically represented by dancing. Dance has its passion. Indian Classical dances are used to illustrate events from the Puranas related to or describing Vishnu. Ras-Lila is performed to dramatize the love scenes of Sri Krishna and the Gopis in Vrindaban.

Dances are also dedicated to Lord Shiva, where the two facets of Lord Shiva is portrayed – ‘Lasya’ and ‘Tandava.’ ‘Lasya,’ the dance to reveal beauty, grace, love and all tender aspects of existence and on the other side ‘Tandava’ is the anger, wild image of Lord Shiva. And dance frames it all well. In the form of the Lord of Dance, Shiva is known as Nataraj and is worshipped by all dancers.

Types of Dance Styles in India

The National Academy for Music, Dance and Drama is the national level academy for performing arts set up by the Government of India. Below is a glance of few top classical Indian dances –

I have tried to cover the mentioned classical dances partly.

Combo of classical Hindustani music and the feet moves with the rhythm of the table or pakhawaj. Traditionally it was dedicated to Lord Krishna, but with the Mughal invasion, Kathak turned into more entertaining and less religious.

The essence of Kathak dance form is storytelling one performed by both men and women. There is no hardcore of following fixed steps. The performer can conveniently change the sequence of the steps to suit his or her aptitude and style of dancing.

The purest form of Indian classical dance, it originates in Thanjavur (Tanjore) of Tamil Nadu. Unlike Kathak, Bharatanatyam needs proper training and direction from learned dance teachers or gurus. In Bharatanatyam rhythm and enactment go hand in hand. The music of Bharatanatyam is based on Carnatic classical music. The chief musical instruments in Bharata Natyam are the ‘Mridangam’ and a pair of cymbals. Sometimes Veena, Violin, Ghatam, and Flute are also used.

The costume of the Bharatanatyam dancers is again an eye-catcher consisting of Pajama or Dhoti and jacket of Kanchipuram silk and Banaras silk. Women wear a tight-fitting ‘Choli’ or bodice of the same color and material as the dhoti. It is considered as one of the toughest of all the types of dance styles in India.

Kuchipudi is a blend of folk and classical dance. Its origin is in Andhra Pradesh and the art forms of South. In other words, it can be said that Kuchipudi is a dance drama. Its gives its dancers a wide area to dramatize.

Kuchipudi dance presents a series of episodes or a particular episode. This dance is a perfect balance between “Nritta,” “Nritya,” and “Natya.” The Nritta is a rhythmic sequence that concludes a song; the Nritya or “Sabdams” in which interpretations and Natya follow the rhythmic passages is a complete dance drama with storyline and characters.

Unlike other dances which you will read in this article, Kuchipudi begins with orchestral music. It includes Mridanga, Madala and a pair of cymbals. Followed by an invocation to a deity and appearance of Ganesha, the elephant-headed God to bless the performance.

Kuchipudi is a complicated dance where the footwork needs to be perfect and balanced. The learned Kuchipudi dancers with their feet can trace out an outline of a lion or an elephant on the floor. They can dance with the feet on the edges of a circular brass tray. Or with a water pot delicately and precariously balanced on the head.

In Orrisa Odissi is the traditional dance and probably owes its origin to the temple dances of the ‘Devadasis.’ Odissi performances are replete with Lores of the eighth incarnation of Vishnu, Lord Krishna. It is a soft, lyrical classical dance which depicts the ambiance of Orissa and the philosophy of its most popular deity, Lord Jagannath, whose temple is in Puri.

As I have myself learned Odissi in my schooldays. I can tell you it’s an adamant one. The posture for this dance is called “Chowka “a manly posture, and the weight of the body is distributed both sides equally. The head, bust, and torso are moved in soft flowing movements to express specific moods and emotions

Odissi dancer drapes in silk sare, Wears on the head ornament called the “Mathami,” on ears “Kapa,” on wrists “Kankana.” It is one of the best types of Dance Styles India.

Kathakali is a theme dance full of symbol and value. It has global fame of 300 years ago. Kathakali means a story to play, and it is an elaborate dance depicting the victory of truth over falsehood.

The dance has taken its theme from the two great epics, the Ramayana and the Mahabharata. It is more symbolic by the use of make-up and colorful costumes, which again symbolizes that the characters in the play are super beings from the other world.

The costume is the striking part of this dance. There is a considerable headgear or ‘Kireetam.’ Then you can see the over gigantic jacket worn called the ‘Kanchukam’ and the long skirt worn over the thick padding of cushions.

The footsteps are slow and delicate with medium tempos, and this gives enough space to the dancers for improvisations and clear bhavas or emotions.

Manipuri originated from Manipur, the north-eastern state of India. Dance is said to be the first step to divine and Manipuri dance is purely religious and spiritual one. ‘Ras Leela’ is the highest expression of artistic genius, devotion, and excellence of the Manipuris.

Manipuri dances are always performed in front of deities. The technique of Manipuri dancing is based on an interesting principle of compensatory movement to achieve rounded movements and avoid any jerks, sharp edges, or straight lines.

The Lai Haroba, a ceremonial dance depicting the Creation, is considered the precursor of Manipuri as seen today. Among the essential constituents of the Manipuri repertoire are the Sankirtana and the Raas Leela, based on the devotional theme of Krishna and Radha. The Raas Leela depicts the cosmic dance of Krishna and the Gopin’s. Another vibrant feature of Manipuri is the Pung Cholam or Drum dance, in which dancers play on the drum known as Pung while dancing with thrilling leaps and turns to a fast rhythm.

Mohiniaattam, a fusion of Kathakali and Bharatnatyam is known for its soft grace, gliding movements of the body a circular use of the torso and a revolving in the half-bent position, with the toe and the heel used in a flowing rhythmic structure. As performed by only female Its a traditional dance of Kerela.

The term Mohiniattam comes from the words “Mohini,” implying a feeling of warm enchantment and “Aattam,” meaning graceful and sensuous body movements. The word “Mohiniattam” literally means “dance of the enchantress.”It’s said that Lord Vishnu has disguised as Mohini. So the central theme of the dance is love and devotion to God Vishnu.

Related: Types of Music In India

The word Sattriya has been taken from Sattra, which means monastery. The Sattriya is a classical, devotional dance, spiritual. Traditionally it was performed only by male monks. Today both men and women are seeing performing this dance. Bhakti Raas is the central theme of this dance and has become an integral part of the culture of Assam.

The dance is based on classical ragas, and the instruments played are drums, cymbals, and flute. Nowadays it has been seen that violin and harmonium are also involved. The Assam silk called ‘pat’ is used to make the dresses woven with intricate local motifs. The ornaments are also based on traditional Assamese designs.

Many Indian Dance Institutions have started to revive once again and keep the ancient culture glow. Many centers have been established not only in India but also worldwide. Next post I will put up a list of Institutes which provide education in this section. 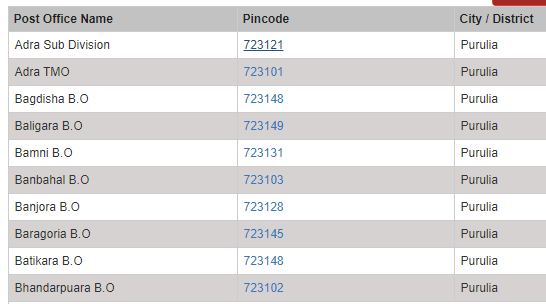 How to find the PIN Code for any place in India