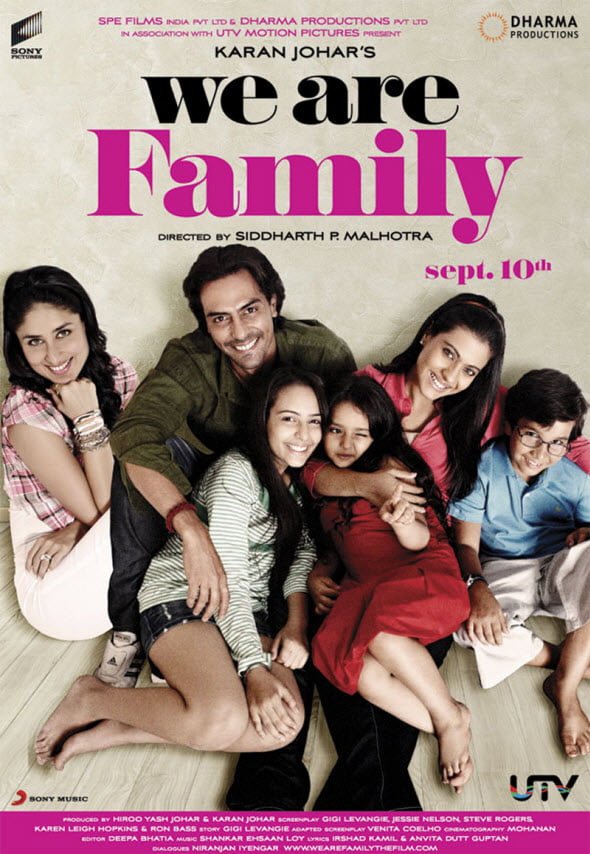 There are a lot of irregularities and flaws with the latest Dharma Production product, but there are some good stuff too.The characters live in Australia yet seem to speak impeccable Hindi.

We are Family – The Storyline

We see divorced couple Aman (Arjun Rampal, half-awake) and Maya (Kajol) at their child’s school annual day. Their little girl Anjali (cute as an angel, Diya Sonecha), in the middle of the act on stage, spots her mom in the audience and says ‘Mama, hiii!’. It’s a touching moment, and the film has a few more.

Aman’s character is a mixed one: He’s clearly not a hands-on dad, preferring to meet his three children over the weekends. He also insensitively chooses little Anjali’s birthday to introduce his new girlfriend Shreya (Kareena Kapoor) to the family.

So while you dislike him for a display of insensitivity to everyone in his life, you admire his faithful friendship towards his ex-wife, even as he drops everything to be with her when she’s diagnosed with a terminal illness(Cervical Cancer). Maya then hits upon the idea of warming up her kids to Shreya whom they hate, so she can take over as their replacement mom.

But the dialogue is a let-down. Each character keeps saying, “Tum aisa nahin kar sakti, you can’t die,” to Maya, as if it were a choice.

And then, when Maya is convincing Shreya to give taking care of the kids a shot, Shreya shoots back, “Main ek career-woman hoon, mom-type nahin.” It’s a ridiculous bit of dialogue; outdated and one that an entire span of working mothers will wonder over.

Again, the whole trip about the urgency of finding a substitute mother is strange when they have their father hale- and-hearty. It again reinforces the cliche that you need another woman to pack the kids’ lunch and pick them up from school, and the father, however he may love the kids, just can’t manage.

And this film is an unabashed attempt at extracting your sniffs and sobs, and sometimes the effort at doing so is too apparent.

The manipulation shows in scenes like the one where the kids are ushered in to see their mother, all tubes and pipes, on a hospital bed. The strategy works; you do cry but not whole-heartedly, more as a reflex response to the sobbing faces onscreen. In fact, you might let out a tired laugh when the effort goes overboard.

Performances of the Actors and Actresses

If there is one reason to see the movie it’s KAJOL, KAJOL AND KAJOL. She is arguably the most gifted actress of all times and she doesn’t disappoint. She is simply amazing. She is the real star of the movie. Like all her performances she is impeccable in the role of Maya as well. Her portrayal of a mother of three who is gonna die soon is just marvellous. Her emotions, her timing her break is fantastic. She leaves us wanting more. Wonder if she considers doing more movies. Kajol is even more convincing than Susan Sarandun, who played the original role in Step-Mom.

Kareena is good. In fact she is on fire, but she plays the second fiddle to Kajol. If it was some other actress Kareena would have walked away with all the accolades. Her on-screen chemistry with Kajol is fantastic and that’s what the soul of the movie is. Arjun Rampal is Ok, but looks good as always. He is the one who has faced the real Step motherly treatment. Well but that was expected too. The kids are fine.

Debut director Siddharth Malhotra serves us old wine in a new, expensive bottle. It’s evident in the characterisation, the dated dialogue, and the choice of the heavy-duty background score where you hear a woman’s alaap for the most part; a mainstay in our saas-bahu soaps. If you’ve been pining for an old-fashioned tear-jerker, this one’s for you.

Why you should eat Almond every day

Group2Deal : Pay when the deal is done