Mt Abu was such a relaxation, One of my best experiences, and after staying there for two days, we were ready to visit Udaipur, which I have read in history is the city of lakes. Surprisingly, there is so much water in this city, and the rest of Rajasthan, especially the Thar’s, have none. Here is our Guide to Udaipur, The City of Lakes in Rajasthan.

We started at around 8 am after having breakfast and planned to take lunch in Udaipur, which is not very far. Check the stats below :

We reached Udaipur at about 11 at noon. After reaching Udaipur, the first thing we do is take the lunch at Hotel Natraj and had Gujarati Food, the quality was amazing, and then we started discovering Udaipur.

Udaipur is an oasis in the dry heart of Rajasthan. Maharana Udai Singh founded the city of Udaipur in 1567. It was the capital of Mewar in Rajputana Regency. Udaipur is surrounded by hills and mountains and set on the edge of 3 lakes. Apart from its glorious history,  culture, and beauty. Udaipur is also known for its Rajput era palaces.

The dream city comprises enhancing lakes, marble palaces beautifully laid on the gardens, and old temples. Nowadays, many of the palaces have been converted into luxury resorts and hotels.

Guide to Udaipur – City of Lakes and Places of Interest

Udaipur city palace is one of the architectural marvels of Rajasthan located peacefully on the bank of the Lake Pichola and is one of the largest palace complexes in Rajasthan. It is started by Maharana Udai Singh in 1559 and completed by his successor till the 18th century. The palace has various towers, dome, and arches, which makes the palace the palace a perfect heritage site.

It is one of the most romantic places in the land of Rajasthan. Maharaja Jagat Singh built it in 1746. It is situated in the mid of the Picola lake in Udairput and was used as the summer’s residence by the Mughal Emperor. As it is surrounded by water from all sides, it remains famous in the world architecture, beautiful fountains, well-laid gardens and the impose of Aravillis make the palace as a perfect place to spend your time. Recently, this royal summer palace is converted into a luxury hotel of the Taj group.

It is a historic site which is dedicated to the Maharana Pratap. It is situated east side of Fateh Sagar on the top of the Moti Nagri or Pearl hills and was completed in 1967. On a white marble platform, the bronze statue of Rana Pratap on the back of his horse. Chetak is the name of the horse, and it is believed that Chetak was a faithful horse and extremely protective towards Maharana Pratap.

Maharana PratapHundred climbs the lined uphill path to pay homage of Rana Pratap and Chetak, who was killed in the battle of Haldighati. Within the memorial complex, there is a Japenese rock garden, which is very beautiful. Battle of Haldighati 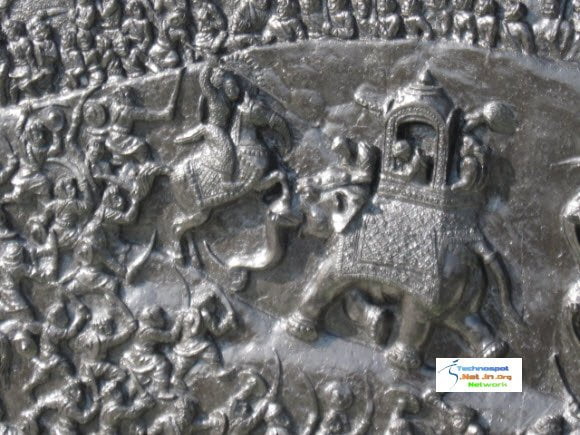 The battle scene above describes how Maharana Pratap was deceived, and Chetak was hurt from below by the elephant. 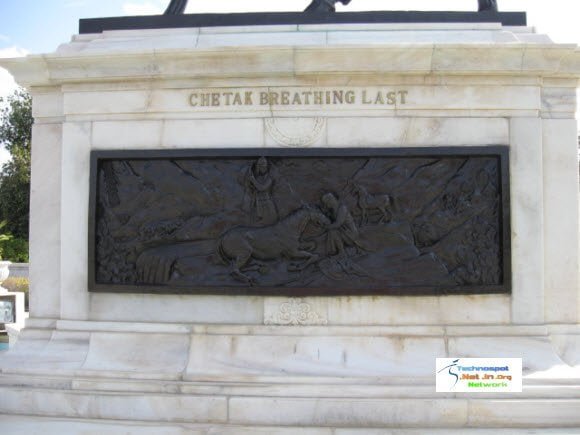 It is one of my favorite places throughout the Rajasthan tour. It was built by Maharana Sangram Singh in 1734 and is situated in the north of the city. Once, it was destroyed by the heavy rains, and Maharana Fateh Singh rebuilt it. The garden is famous for its lush green lawns, fountains, flower beds, and marble architecture. There are five beautiful fountains, which are called Swagat fountain, Sawan Bhado,  Kamal Talai,  Ras Lila, and Bin Badal Barsat. All these fountains have their special meaning according to their name.

Historical aspect: The King made the design of the garden and presented it to the Queen. Forty-eight maids accompanied the Queen at the time of her marriage. The Queen used to come here with her maids and spend their time in leisure.

The symbol of Surya symbolizes the Maharanas as the Suryavanshsi. It is also known as Surya pol built bt Maharana Karan Singh. The weight of the sun symbol is estimated to be 50 kg. The symbols are made up of metal and gold. The significance of the symbol is that during monsoon, the Maharanas would have their food and started work only after a visit to the symbol.

We missed seeing this, but I was able to find a picture for you from Flickr. Thanks to Lapidim

There are few more places in Udaipur, which are worth seeing like Jag Mandir, Jagdish Temple, Gulab Bagh, etc. which you can also see. We had to skip since we need to travel to Nathdwara, which is 3.5 hrs of Journey, and its a good idea to reach there by evening. I hope you liked our Guide to Udaipur., The City of Lakes in Rajasthan.

How to search google using SMS in India

An MBA quits her job, becomes Sarpanch to serve her native place