We started our Rajasthan Trip from Jaipur, but as I mentioned in the plan, Jaipur is the last place we will be exploring.  After landing on Airport at 5 pm IST, we had our Cab ready and got the luggage packed and started for Shyam Khatu, Temple of Bheem’s grandson Barbareek. We stayed back at Jaipur for around 2 hours for evenings, Snacks and Tea and finally started at 7 pm. Here is our Guide to Shyam Khatu and Salasar Balaji. 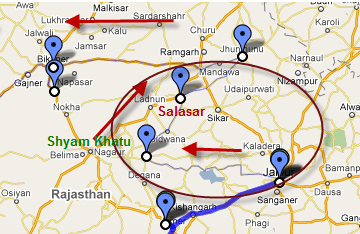 Shyam Khatu is 48 km from Sikar district, which is about 116 km from Jaipur. The temple is well-connected by road as well as railway. The temple of Lord Shyam is made up of pure white Makrana marble. It stands out as a perfect example of a unique architecture. Also, this is the only temple where the idol of God is only in the form of a HEAD.

There is a holy pond near the temple. People believed that a dip in this pond could cure a person of any disease and make them healthy. Every year thousands of devotees visit Shyam Khatu at the fair, which takes place in Feb or March. We reached Shyam Khatu four days ahead of the festival. 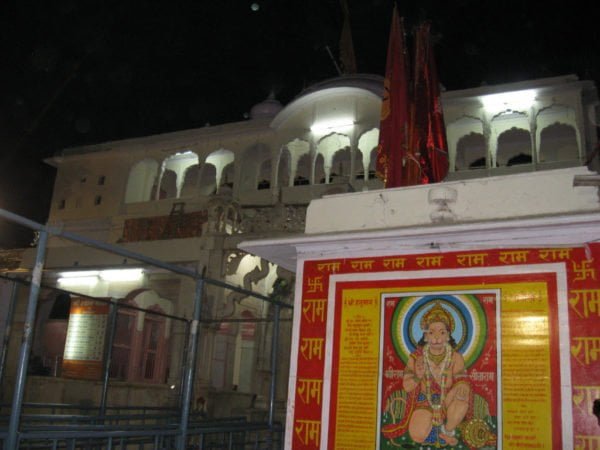 The history of Shyam Khatu originates from the Mahabharat. His childhood name was Barbareek. Barbareek was the grandson of Bheem and the son of Ghatotkacha. From the beginning of his childhood, Barbareek was a fearless warrior. He learned the art of warfare from his mother. Owing to the fabulous power of Barbareek, Krishna did not want to participate in the war. He knew that if Barbareek joins, He will win. Lord Krishna asked Barbareek to sacrifice his head for charity. Barbareek maintained his promise to sacrifice his head like a real student, but at the same time, he wished to watch the war and  Krishna granted his wish. Later on, his head is buried in Khatu, and at that place, the temple is constructed. 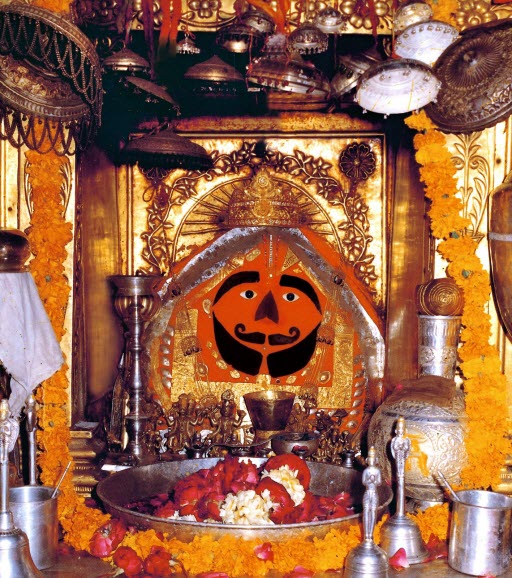 We reached Salasar around midnight. There are a lot of hotels and Dharamshala available around the temple area, and getting a room should not be a problem. Once we booked, we then finally rested at night for morning darshan.

Salasar Hanuman Ji is a religious place for the devotees of the Lord Hanuman. The temple is made up of gild and silver with complete security. You would not be able to get a camera or mobile phones inside. Most of the time, this temple is jam-packed, but we were lucky and had a great darshan.

Besides the  Hanuman temple, there is also a temple of Anjani Mata, Mother of Lord Hanuman, which you can visit.

There are a few things to notice inside the temple. The Big Havan Kund where Yagya happens every day. It is said that if you take a bit of ash inside your mouth, it heals your body. The Havan Kund is so big that they have a big exhaust over it, which is noticeable. Yagya is a ritual performed to give offerings and thanks to our Gods into a sacred fire, which is lit in the Havan Kund.

Two fairs take place in April in the Salasar temple. Lakhs of devotees came here on Hanuman Jayanti as well as fair. It is in Churu, district of Rajasthan, about 57 km from Sikar. Sikar, Sujangarh, Ratangarh, and Jaipur are the nearest railheads for the Salasar.

The history of Salasar Ji temple started from a village called ASOTA. A farmer was plowing his field. All of a sudden, some rock hit the plow. He stopped the plowing and dug up the soil of that place. He found an idol covered with dirt and sand.

At the same time, his wife came there with his lunch. The farmer showed the idol to his wife. She cleaned up the face of the god with her saree, and then she discovered that the icon is of Balaji Hanuman. The farmer and his wife bowed their heads with devotion. The news of idol spread immediately throughout the village ASOTA as well as in the NAGAUR district.

The best time to reach any temple would be morning because you need to start your journey next. We reached the temple around 8 in the morning and were there for an hour. It concludes our Guide to Shyam Khatu and Salasar Balaji. You can have your snacks here and then start for Rani Sati, Jhunjhunu, which is around 2 hrs drive from here. 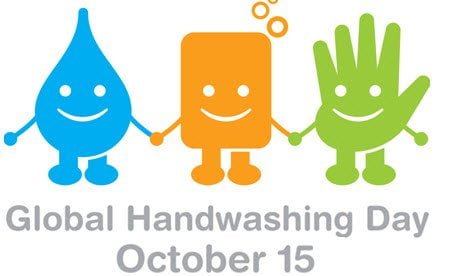 Eco-Friendly Indian Flag which can grow into Marigold