After paying visits to the temple of Salasar and Shyam Khatu, we move on to JhunJhunu and then to Deshnok. We will cover 300 KM to travel by car and since we need to reach Karni Mata temple before it closes at night. It would be best to start early in the morning from Salasar. We will hold our night at Bikaner, which is close to Deshnok. Let’s begin our trip to Temples of Rani Sati and Karni Mata

Tip: Finding good food in Jhunjhunu is little tricky except in the Temple. So start early to reach there by Noon.

As soon as you start from Salasar keep your camera ready because you will be spotting Peacock and Deer till Bikaner. The best part of the complete trip is you have pretty smooth roads all over Rajasthan.

The temple is one of the most famous temples in the Jhunjhunu,  Rajasthan. It is vast and is full of colorful wall painting. It also decorated with white marble and gardens all around.

Rani Sati Temple was built to keep alive love of Narayani, Wife who gave her life for her beloved husband who died fighting.  Her name is a sign of love, sacrifice, and honesty towards her husband.

Marwari Temple Board, Kolkata manages the temple. It is one of the wealthiest temple trust of India and is second to Tirupathi temple.

The atmosphere and the garden of the temple attract every tourist. In the compound of Rani Sati temple, there is the temple of Lord Ganesh, Hanuman, Shiva along with the temple of thirteen Satis. Day meal is distributed on the coupon basis after
worship, so if you start in time, you can have lunch here.  It closes at 1:30 Pm generally.

On the Way to Karni Temple

On the way to Karni Temple, we can cite a few Peacocks, and they were so beautiful. Here are one and rest villages be shown in the gallery at the end.

We found these Peacocks near Temple DoJati, which is on the way to Karni Mata Temple. The specialty of this temple is two trees which share the same roots and is something that should be looked upon.

Deshnok is on the same way to Bikaner and is one of the vital landmarks around Bikaner because of the trust and faith people have in Goddess Karni. The temple is about 30 km from Bikaner.

It is the only temple where rats move freely and are worshiped in the temple. The most important feature that attracts the visitor to the temple are the rats who run on the campus of the temple. The rats are considered as the army of the Karni Mata. I and it is also called as Temple of Rats. 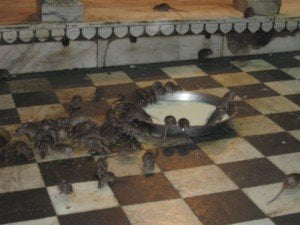 Remember to move into the temple without lifting your feet. You should brush your feet against the floor and move ahead. If one of the rats touches your feet, it’s considered auspicious, but If one of the rats is killed by someone’s foot, one should compensate with a rat made up of gold.

Most of the rats are black, but there are 4 or 5 white rats.  If you are lucky to sight any of the white rats, it is considered very auspicious. However, there will be few people in the temple who know where their white rats can be found often and help you to sight one of them for you.

Video of the Rats at Karni Temple

The temple is fascinating the massive silver gate and marble carving that was donated by Maharaja Ganga Singh ji. According to a local legend, Karni Mata, the 14th century mystic and an incarnation of Hindu goddess Durga, implored, Yama, the god of death to restore to life, the son of a storyteller, and upon his refusal she incarnated the dead son, and all of the storytellers as a rat, under her protection

Make sure you reach the temple by 9 PM as the temple closes by 9:30 Pm night. You can leave your shoes and belongings inside the car. In case you are tired too much, I would suggest having dinner near the temples. There are a couple of small food spots which can prepare food on demand.

From here you can move on to Bikaner which is 30 Km from here, and you should be there in an Hour max.  You can either have a prior booking or ask your driver to suggest some right place. We stayed at Chotu Motu Hotel, which is in an area where everything is close, including restaurants where you can have a good breakfast in the morning.

Learn Hindi Online with these simple Games and Quizzes

Trai asks Telcoms to be Clear on FUP details, Ask minimum of 256 Kbps in any broadband tariff plan